Several years ago I was introduced to the FISH! Philosophy. The FISH! Philosophy is a customer service training program developed by John Christensen, and was inspired by work culture at Seattle’s Pike Place Fish Market. The Fish Company is renowned for their customer service and entertainment, and are a well-known attraction at the Pike Place Markets in Seattle, Washington.

The employees at the Fish Market have fun at work. When a customer orders a fish, the staff member yells out the order and the other staff join in. The fish is thrown to a catcher behind the counter who weighs and wraps the fish. They often invite customers to join the fun, throwing and catching fish, tasting the produce and cheering the fish catchers.  In 1991,CNN named the Pike Place Fish Market as one of the three most fun places to work in America.

What is The FISH! Philosophy? http://www.charthouse.com/content.aspx?nodeid=22610

However, in a video on YouTube, a Pike Place Market employee apparently informs his interviewer that the FISH! philosophy does not represent Pike Place, stating, “The guys that work here don’t actually like the FISH! videos.” I have also heard reports that the fun is forced and employees are not really living the FISH! Philosophy.

I wanted to see the FISH! Philosophy in action for myself, so as I am in the USA and passing through Seattle, I visited the Pike Place Markets.

On arriving, we were struck by the number of people milling about watching the employees at work. The owner, John Yokoyama, was out front along with three staff, and behind the counter were another three. I saw some familiar faces from the FISH! videos.  One of the employees invited us to taste the smoked salmon and salmon jerky. He stated that it was “better than Tasmanian salmon” but when we told him we were from Tasmania, he was humbly apologetic. He was right though – the salmon is just fantastic.

As people bought fish, we observed the antics in action. “Monkfish, 3 pounds”! was yelled out from the floor, and “Monkfish, 3 pounds”! was echoed by all employees. The fish was thrown back to the catcher who weighed and wrapped it. I mentioned that I had seen the FISH! video and that I wanted to see it for myself, and I was invited behind the counter to catch a fish. Jaison took me under his wing, helping me up the slippery ramp behind the counter and advising me on the best way to catch. He gave me a salmon to hold, to test the weight and slippery factor before the real catch. I said “I’ll do my best”, to which Jaison said “That’s not how we do it here. You bring your best. We do it, we don’t try”. Jaison was enthusiastic and encouraging and certainly embodied the FISH! principles.

The salmon chosen for my catch was 5 pounds, and as it sailed over the counter, I had a bad case of nerves, but I am pleased to report that I made the catch. The staff cheered and the customers clapped.

So was the FISH! Philosophy alive and well? I have to say that it wasn’t as amped up as in the videos. But I felt a sense of the philosophy in every interaction with the employees. They were friendly, focussed, having fun and they were selling a lot of fish. 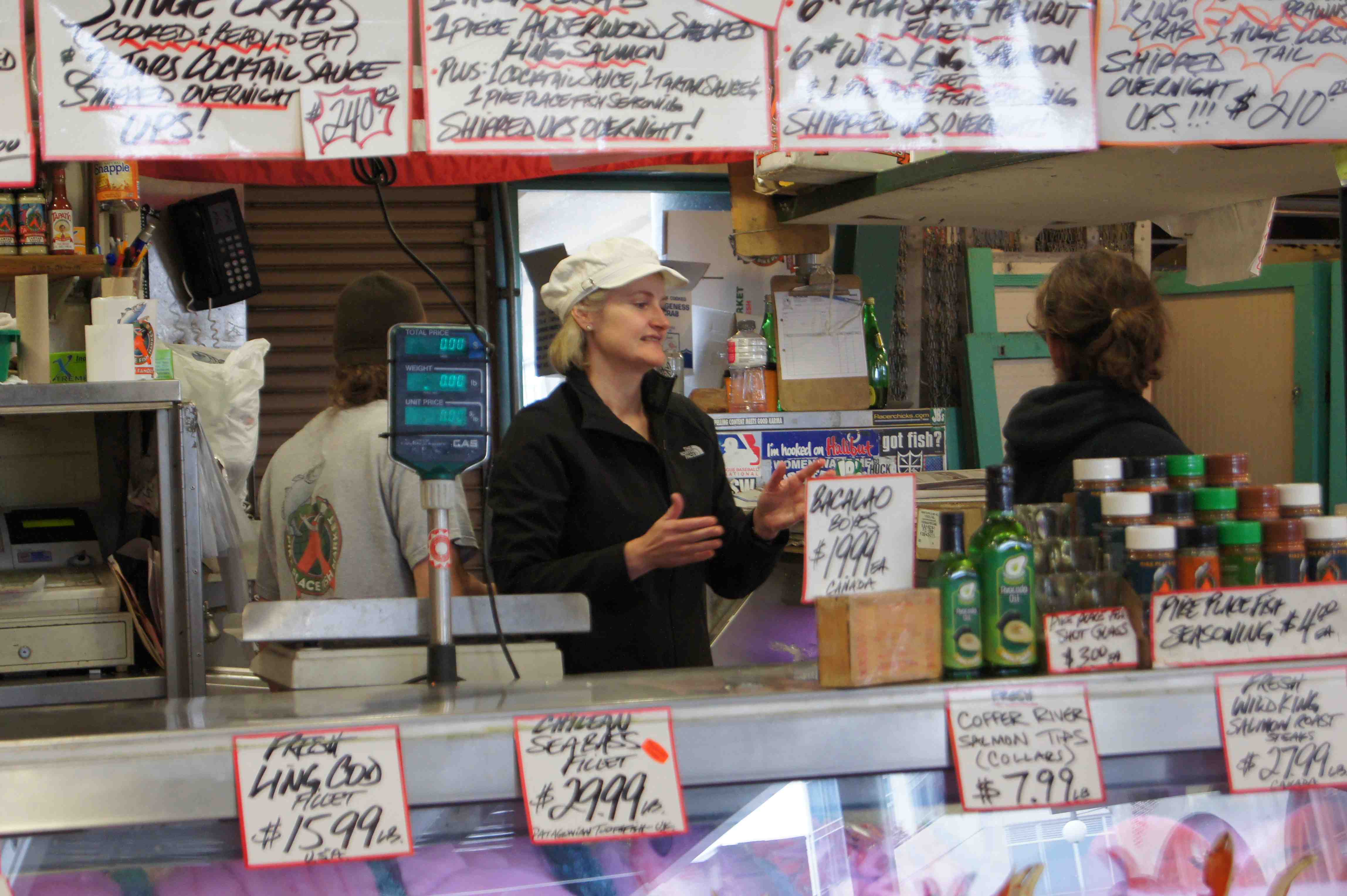 Awesome! I love the FISH! Philosophy and I am glad you got back there. It brings more truth to the story.

Great blog thanks Ros – what am amazing experience, I’m really glad you got to see it for yourself.

I recently read an article in Success Magazine about how a lot of companies attempt to FORCE a certain culture into the members of the team. This backfires greatly. However, when it is done in a natural way and all the employees involved are brought in to embody that culture, it can be very effective.

You are a one! What it is to see your way of being in the world actually fly. That’s the Fish philosophy actually at work; that you not only pursued the idea, tested the reality, you tried it yourself and you shared it with the rest of us. I have been convinced for a decade that your ability to do this, unleashed, would be an entirely wonderful thing. And it is. Hugs Fabe

It certainly was an experience to see FISH! in action. Today we went to the Boeing factory in Everett – my next blog will be about that.
Thank you for all your kind comments
Ros

Hi Ros
Such a delight to read this article. I visited Seattle’s Pike Place Market during 2009, especially to see the FISH! philosphy in practice and was impressed by the encounter. It was crowded and there was a tv crew but the staff kept up the momentum despite what must be like living/working in a fish bowl. I am a fan of the FISH! customer service philosphy. I enjoy your acticles, Ros. Thanks for making the effort.

We are based in Hobart, Tasmania and provide services nationally and internationally.
Any questions? Please get in touch – we’d love to talk to you about how we can help you get from where you are now to where you want to be.
Facebook-f Twitter Linkedin-in
Menu
© 2022 Rosalind Cardinal & Associates
3 shares