In our digital age, companies and organisations have been using “company culture” liberally in everything from career postings and websites to job descriptions and orientation literature.

But what exactly does company culture mean? And how can companies leverage not only this phrase but how it’s internally defined in order to more effectively attract job applicants, engage talent, and also retain team members when all is said and done?

Software Advice, an online reviewer of talent management technology, recently conducted a survey (you can read the full report and article about it here) in which 886 U.S. adults were asked a simple question: what does an ideal company culture look like to them? The most common response? “Casual/relaxed.” The other responses are detailed below: 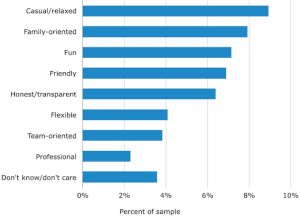 Here’s where the research gets interesting, however.

Now it shouldn’t be any surprise that the majority of respondents claimed their ideal workplace culture would be one in which the attributes “casual and relaxed” are predominant. After all, companies like Google all but boast such work environments, offering their team members incentives such as game rooms, cafeterias stocked with free food, napping pods, on-site daycares, nursing rooms, and stunning interior design. One would sooner think they’ve walked into a vacation resort than a place of employment. In fact, Fortune Magazine just this year named Google the best company to work for. So it’s no wonder this is precisely what people are looking for in their workplace…

The researchers at Software Advice took one additional step by asking those same 886 individuals which of the above traits, when present in a company’s culture, would make them more likely to apply to an open position with a company?

Surprisingly the idea of a “casual and relaxed” culture was no longer a priority. In fact, according to the chart below, nearly a third of respondents decided that the most important trait a company could embody was that of “honesty and transparency.” In other words, it means more to job applicants and employees to know that their leaders are going to treat them and communicate with them in a fair and open way.

What this means for companies and leaders:

While we may be tempted to think otherwise because of the incentives and perks we hear about without end, these aren’t the things that most matter to team members. Advertising your culture as being one where team members can enjoy honesty and transparency throughout every facet of their experience—from communications with management, to staff meetings, to even internal emails—may very well make for a more attractive organisation, and thereby make for happier employees.

“If companies are seeking to attract candidates using their company culture as their primary recruiting hook, letting it be known that your company is home to an honest and transparent culture might just be the most effective way to build your employer brand. And if you’d like to ensure that your company is as honest and transparent as possible, consider this advice from Halley Bock, president and CEO of global leadership development and training firm Fierce, Inc: start small. Supervisors and managers should constantly ask themselves, “Am I being candid? Am I being transparent?”

As Halley Bock further says: “Culture is an outcome of all the relationships that are occurring within an organization. So if you want to have a culture of honesty, then you need to back that down to the attributes of every single relationship within a company.”

Openly communicate your company’s goals to team members. Share successes and create an open forum where employees can learn from setbacks.

Encourage an environment where employees can freely come to their leaders and where leaders actively nurture the working relationships between themselves and their team members.

Stress honesty in communications with vendors and customers.

Allow employees to voice concerns, offer ideas and seek counsel without the fear of punishment or a defensive reaction.

These simple tenets are easily implemented and will begin to create an environment where your team members flourish and thrive within a culture that the majority of people are looking for.

That’s interesting Ros. I would have thought casual/relaxed and family friendly would have been the big drawcards. But it makes sense that honesty/transparency rank higher. You might be interested in this US based tech company which has an open salaries approach http://open.bufferapp.com/introducing-open-salaries-at-buffer-including-our-transparent-formula-and-all-individual-salaries/

Thanks for the info Jon, I’ll have a read. Cheers, Ros

We are based in Hobart, Tasmania and provide services nationally and internationally.
Any questions? Please get in touch – we’d love to talk to you about how we can help you get from where you are now to where you want to be.
Facebook-f Twitter Linkedin-in
Menu
© 2022 Rosalind Cardinal & Associates
26 shares