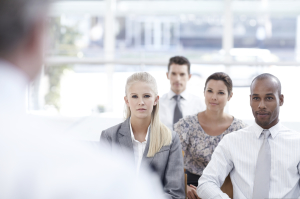 Our guest author, James Goodricke, continues his thoughts on Generation Y in the workplace in Part 2. Read Part 1 here.

This isn’t to say that Generation Y doesn’t care at all about money. A recent case study conducted by Software Advice found that salary was still the most important things for Generation Y’s in a new job, but only by a narrow margin. Workplace culture, fulfillment and personal development were ranked almost as high.

“Interestingly, several of those applicants who ranked salary and benefits of lesser importance noted they had previously worked in a high-paying job — and had discovered that money wasn’t everything” says Managing Editor Holly Regan. “It seems that compensation may be of diminishing importance as Generation Y workers garner more professional experience.”

One thing that most Generation Y employees value highly is a career that doesn’t encroach on their personal life. This isn’t to say that they don’t want to work hard, but rather they just want the option to work flexible hours, work from home or work weekends to catch up on lost time. Realistically, there will be some things that they just need to be in the office to do, but if you try to be accommodating of their changing lifestyle, you will find them more motivated and productive.

Another important aspect is the management system. Generation Y employees generally want to contribute to the workplace and have input in the decision making process, and as such they find top-down hierarchical management stifling. Managers should try to involve Generation Y in the work that they do, giving them control to manage tasks themselves, rather than having them delegated to them.

Training or mentoring can be a good way to facilitate this if they lack the skills or confidence to handle things on their own, and will also give them a greater sense of fulfillment and development through working in your organization, which will encourage them to stay with you longer.

Managers should also allow them to make suggestions or improvements and include them in the decision making process where possible – not only will it increase their motivation, but it will likely produce new ideas that weren’t otherwise considered. As well as this, strive to recognize their achievements, either through giving gifts or simply thanking them for their hard work. This sense of appreciation will help to keep them motivated and striving to do better in the future.

3 replies on “Generation Y: how to attract and keep them?”

Great Article Ros, I could not agree with you more in relation to Gen Y. I have done a little research myself on the subject and find that they are really just wanting to express themselves and be involved as much as possible to try and make a difference! Keep up the great work.

Thanks Aaron, I appreciate the feedback!

We are based in Hobart, Tasmania and provide services nationally and internationally.
Any questions? Please get in touch – we’d love to talk to you about how we can help you get from where you are now to where you want to be.
Facebook-f Twitter Linkedin-in
Menu
© 2022 Rosalind Cardinal & Associates
11 shares