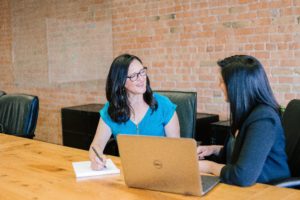 There are a few things that people immediately decide within mere seconds of meeting you. Some of those things include deciding if you’re smart, if you’re successful, and— perhaps most importantly—whether or not they feel like they know, like, and trust you.

Your ‘know, like, and trust’ factor is important when you hold a leadership position and are managing a team of people day-to-day. People need to not only know you, but like and trust you as well. When all three conditions are satisfied, you’ll find that your team members are more willing to go the extra mile for you and put forth their highest quality of work. The workplace will often have a more positive and enjoyable atmosphere as well, which can boost job satisfaction for your employees and lead to higher retention.

Setting aside time to work at becoming more likable, known, and trusted is essential. It can very often be the difference between securing a lucrative contract with a big client, winning a promotion on the corporate ladder, or simply motivating your team toward a new ambitious goal.

Fortunately, there are a handful of psychological hacks you can use to easily endear yourself to people and become more likable and trusted both in the workplace and in general.

Here are 5 easy ways to improve your know, like, and trust factor today:

1. Get people to talk about themselves.

Talking about yourself stimulates the same brain regions that intimacy or a good meal stimulate. Why is this? Talking about one’s self increases vulnerability, and when we’re vulnerable, we naturally establish deep emotional bonds with each other. It’s hard not to have an affinity for someone with whom you share such a bond.

So the next time you have an important conversation in the books, lead with getting the other party talking about themselves. This establishes rapport and sets a comfortable tone, making you more likeable.

Individuals with great charisma tend to use words that others can relate to. In fact, psychologists assert that the most effective communicators use concrete language, as opposed to abstract language.

For example, University of California at Davis psychologist Dean Keith Simonton says that expressions such as “I feel your pain” form an emotional connection with others, while expressions like “I can relate to your viewpoint” fall flat. Observe the language you use in important social situations and be sure to choose expressions that have a more emotional/relational angle.

As simple as it sounds, this one action can make a world of difference in your conversations with others. According to Forbes, “Smiling has documented therapeutic effects, and has been associated with: reduced stress hormone levels (like cortisol, adrenaline, and dopamine), increased health and mood enhancing hormone levels (like endorphins), and lowered blood pressure.”

A recent Penn State University study confirmed that when we smile, we not only appear more likeable and courteous, but we’re actually perceived to be more competent.

Smiling is contagious. It not only puts those in your presence at ease, but it also opens room for a more relaxed social situation where each party feels comfortable, thus making it easier to endear yourself to others. So to become more likable and trusted, smile more!

Have you ever noticed how people who spend a great deal of time together eventually end up mirroring each other’s bodies in some way? Psychologists have discovered that this naturally occurs as an indication of trust and safety. In other words, we tend to mirror someone when we feel comfortable and relaxed around them.

You can also replicate this natural phenomenon in day-to-day life, however. The next time you’re in a negotiation, try mimicking the other party’s actions. If they take a sip of water, do the same. If they lean forward, copy the behavior. Your actions will automatically signal to their brain that you’re someone to be trusted.

To understand this, we need only consider the high-profile product announcements Steve Jobs regularly hosted for the Apple company. While facts and figures played a role, of course, such engagements were almost always more focused on the potential of the new product, of what it could be used to accomplish, on how it could potentially change a user’s life.

In your next presentation, don’t just rely on cold data to win over your audience. Talk about the potential as well, and you’ll have an audience that’s more cognitively engaged.

Implement these 5 strategies in your next business conversation, contract negotiation, or workplace meeting, and you’ll be well on your way to becoming a leader who people know, like, and trust—and want to do business with!

2 replies on “5 ways to improve your know, like, and trust factor as a leader”

We are based in Hobart, Tasmania and provide services nationally and internationally.
Any questions? Please get in touch – we’d love to talk to you about how we can help you get from where you are now to where you want to be.
Facebook-f Twitter Linkedin-in
Menu
© 2022 Rosalind Cardinal & Associates
0 shares